You are here: Home / Incredible India / Places near Mumbai & Pune / One Day Trek / Ghangad fort trek [Excellent for camping and fun for beginners]
Tweet
Share45
Pin1
47 Shares
Ghangad fort trek information on internet is rated as difficult or medium level, however after the installation of ladder by the Shivaji Trail group it is rated as Easy or Entry Level Trek 🙂 Many Thanks to Milind Kshirisagar sir for that from team FONA. This is one of the best monsoon trek I can recommend for beginners.
Beauty of Ghangad fort you can climb it easily .. get to ~3000 feet height and enjoy magnificent views of nature. On the mid way you see a huge rock piece fallen down creating awesome triangular wedge a scenic photo point for you.
Another interesting thing is that you have many neat & flat places for camping, even small caves give you sheltered places for tent camping.  Surprisingly you see a well built toilet on fort !!! although it is not maintained so not so much useful.
Start of trail from the base village Ekole where we met Lahu Kadam a local villager who voluntarily agreed to guide us (Although it is simple trek we agreed so as to understand local area and his views) 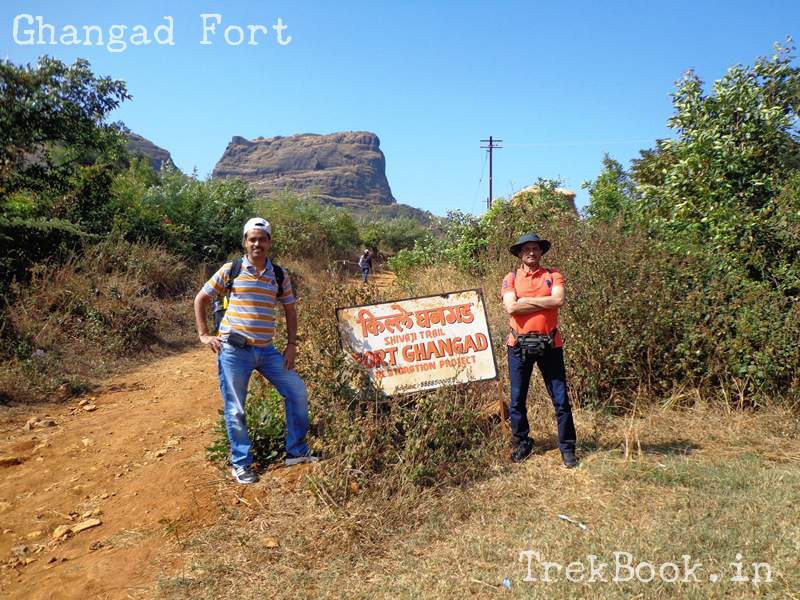 From this point you can easily see views of Ghangad fort, within few minutes you get beautiful view of Chilkhati Buruj (Bastion) with the pride of Maharashtra … Saffron colour flag hosted onto it. 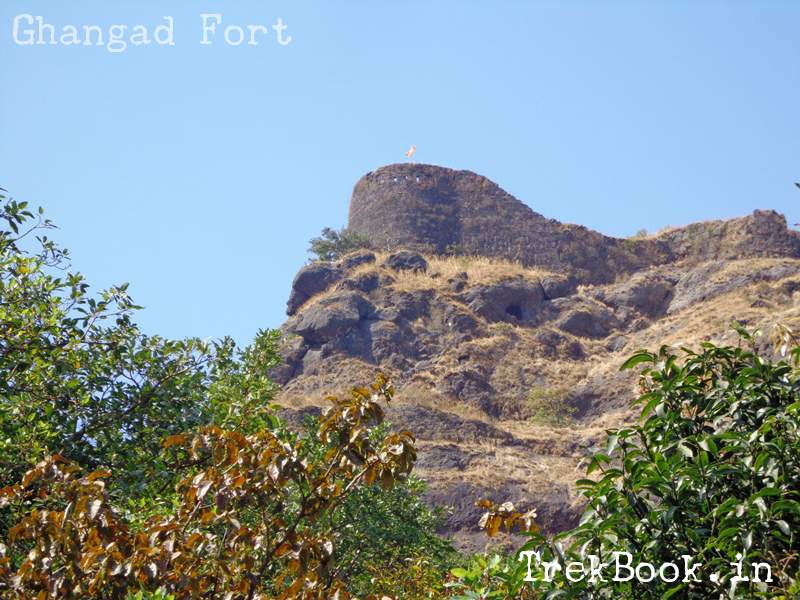 Now just before you reach the Garaai temple, on the left hand side (slightly inside, Lahu Kadam can guide you) you can see a Shivlinga, looks like rest of the temple has ruined over time period 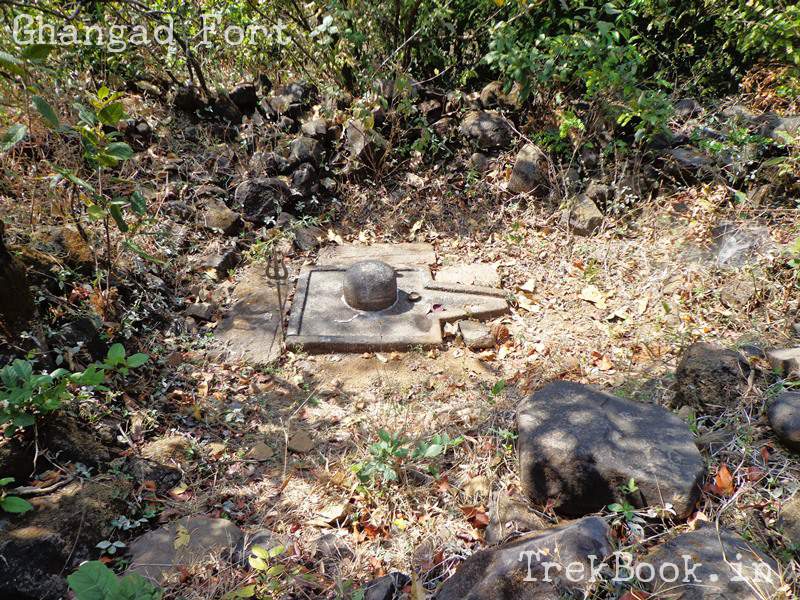 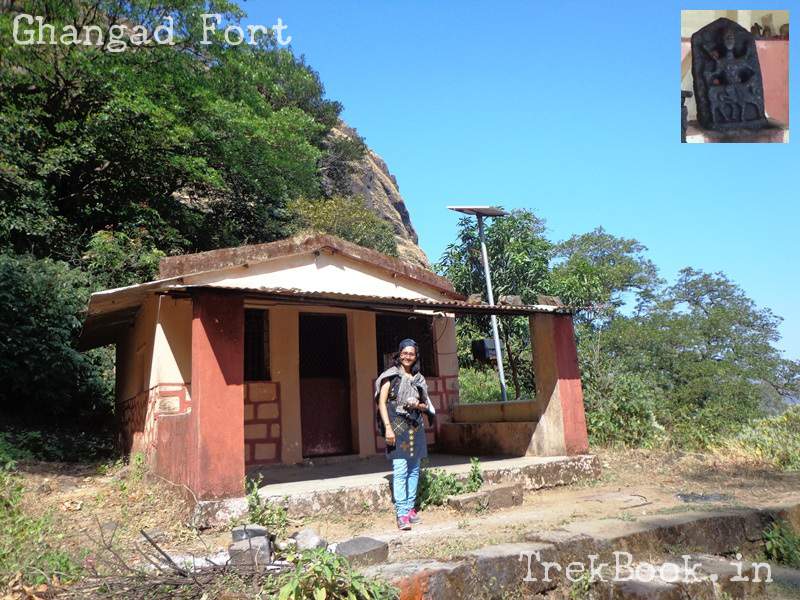 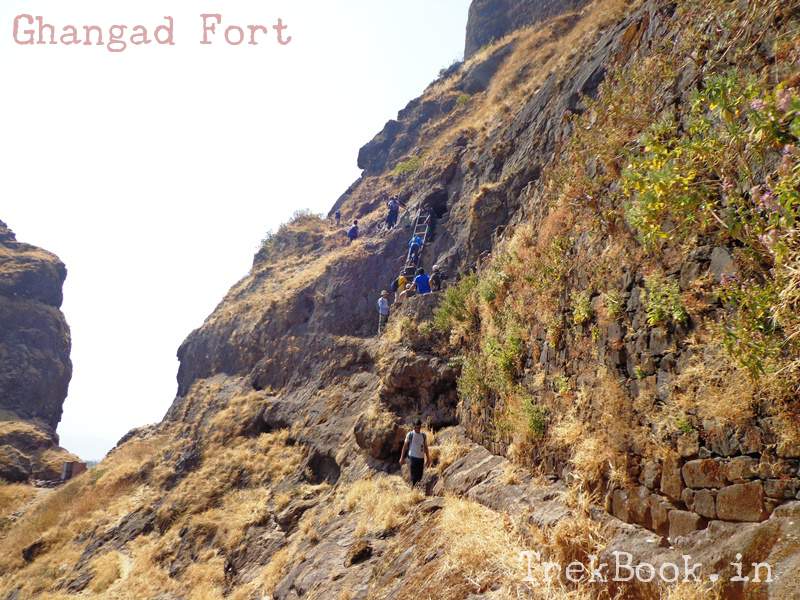 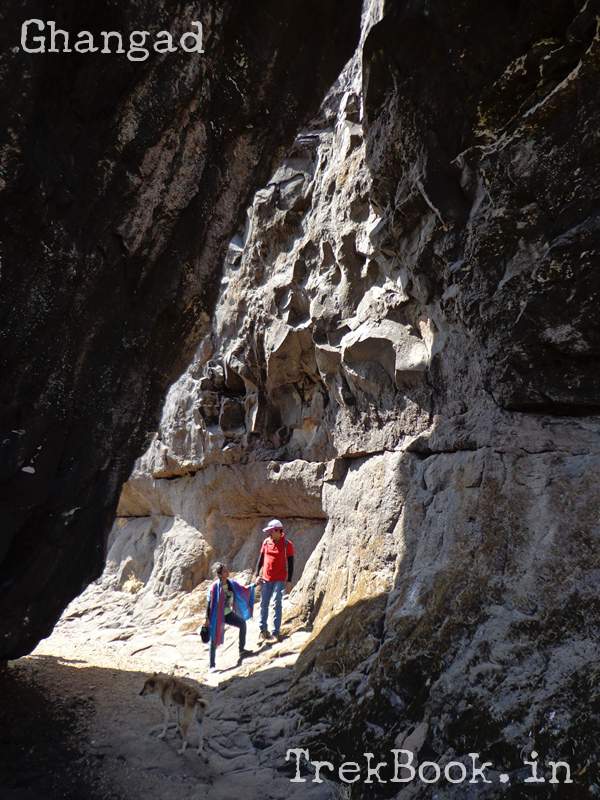 This time Manoj and me decided to collect plastic garbage generated by fellow trekkers or picnic people all around the fort, Shahane sir and Nikalje sir also helped a lot. We could collect almost two big bags full of plastic waste from fort. 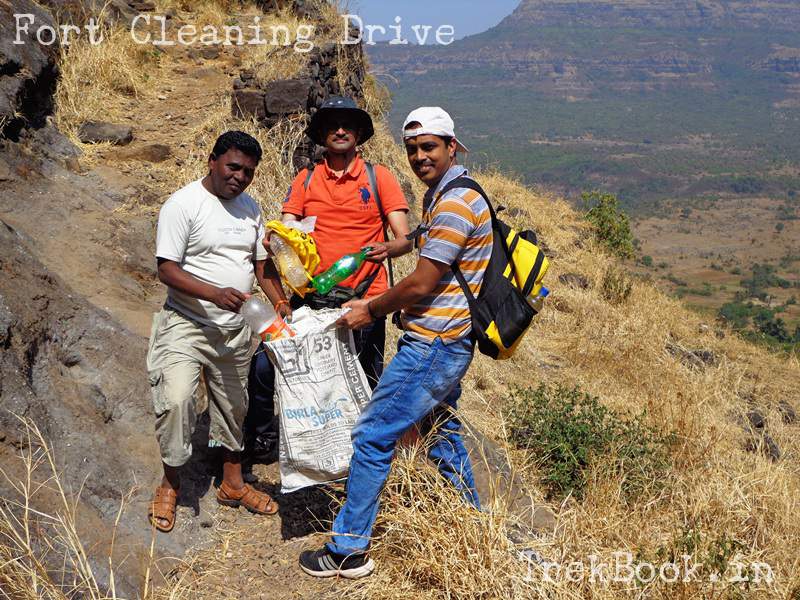 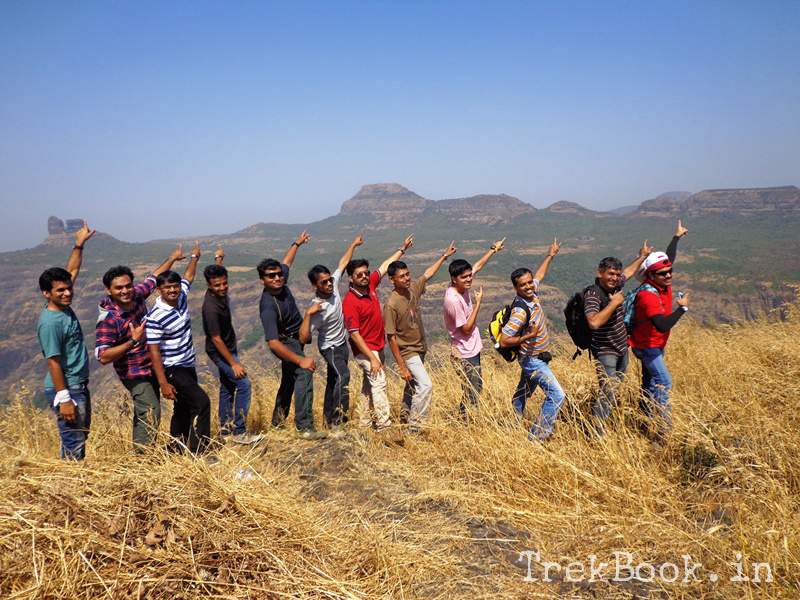 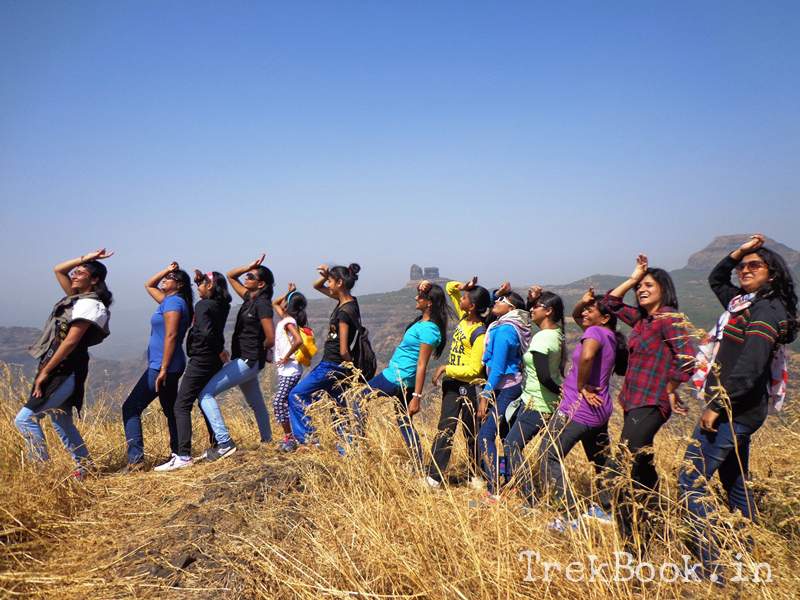 Ghangad fort trek [Excellent for camping and fun for beginners]

In June 1665 Shivaji Raje and Mirza Jaysingh, the muslim (mogal) army chief, agreed on a truce, called “Truce of Purander”. Accordingly Shivaji Raje had to hand over 23 forts of his empire to the mogal addressors. Ghangad was one of the forts.

In 1670-71 Shivaji Raje ran a series of attacks against the mogals, winning back the said forts and land lost due to the truce. Ghangad was acquired again and was hend by the Marathas till the rein of Hon. Rajaram

After King Rajaram’s demise Ghangad was again taken over by the mogals. Then again during the rule of Queen Tarabai, it was brought back by Pantaji Shivdeo, a man under the directives of Shankaraji Narayan Sachiv

Between 1737 and 1739 the Marathas attacked northern region of Konkan, then possessed by the Portugese, which is known as “Vasai crusade”, 25 soldiers then stationed on Ghangad

In the later days of the Peshwe rule Ghangad was turned into a prison, housing political prisoners as well as social criminals

n 1779 Arjoji Rao Dhamale was the administrator (“Killedar”) of Ghangad. During these days Sakharam Hari Gupte, a dashing military chief of Raghoba Peshwe was imprisoned and died here.

During the rule of Bajirao Peshwe the second, fort Ghangad was administered by Baioji Junji

Water :  Cistern at fort, however water is not drinkable
Food and stay : You can carry food or cook on your own during camping or you can get it at base village Ekole (refer to contact details with person photographs at end of post)
Good Time for trek to Ghangad : Monsoon, Winter and Night Summer trekking

How to reach Ghangad fort (~85 kms from Pune) 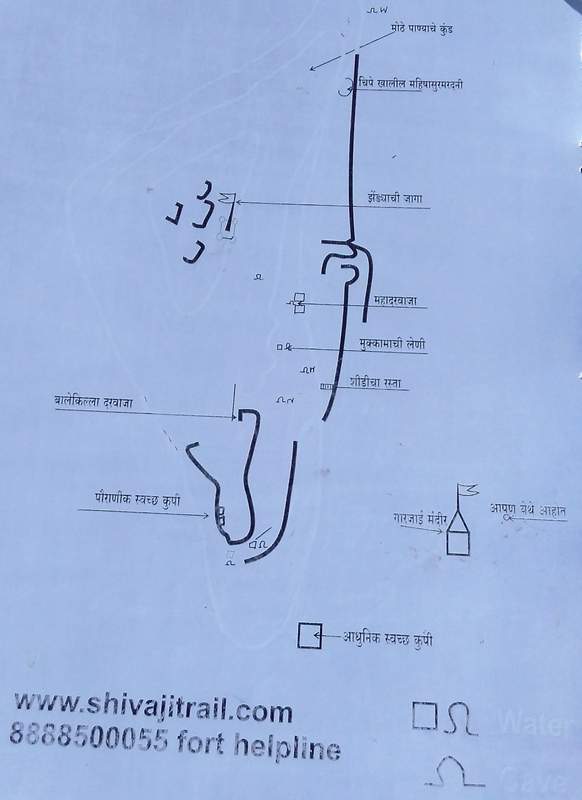 I have added his photograph below for you. I visited his home to see if one can stay there and found to be of acceptable level of cleanliness ( his house also has toilet facility) So you can pre-order food to him 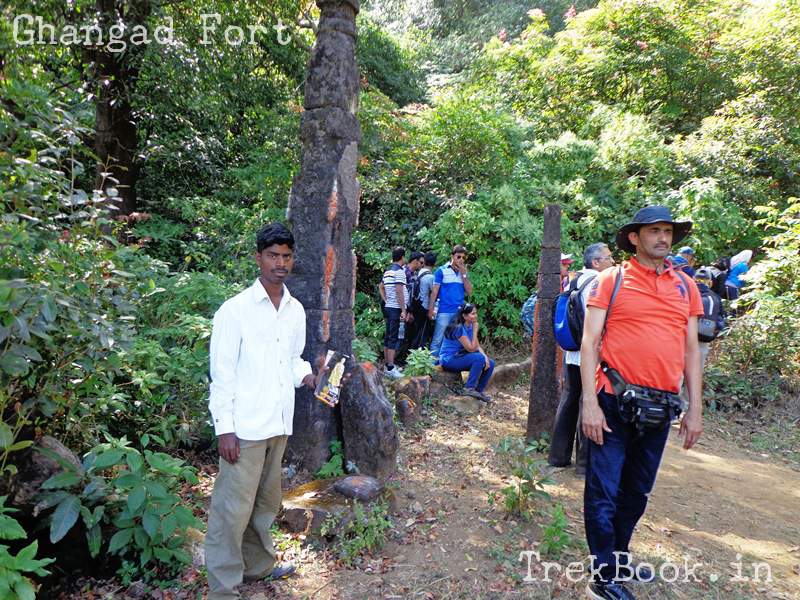 And finally the most important learning of this trek … acquaintance to the plant called as Dat Padi [Teeth Falling Plant !] Yes .. from years you must have heard stories about trekker who chewed bush plant stem and found all of his teeth fallen by morning !!! I saw that plant .. I came to know that villagers apply this plant juice to their bullock before selling so that he looks strong and stout to get high price !!! This happens due to swelling of skin !!! here is photograph of Dat Padi plant for you. 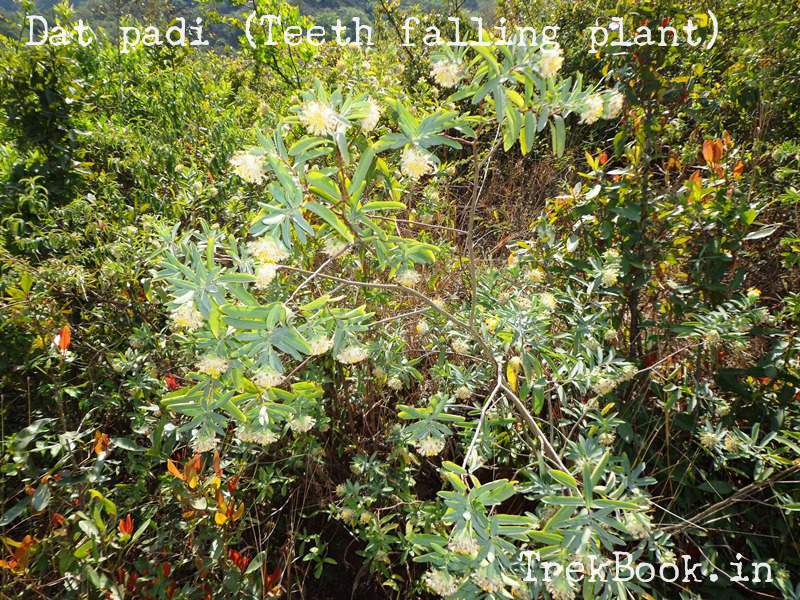 Do read Things to Carry for Trek in India